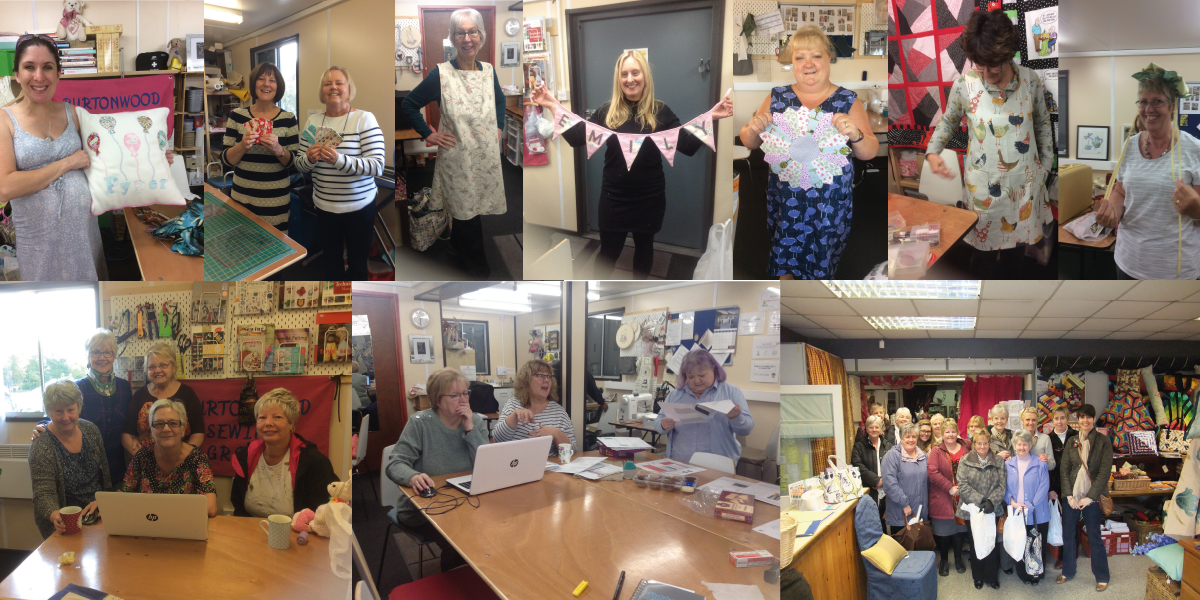 In 2012 “Seams Easy” started up in the Burtonwood Community Centre in an effort to help keep it open.

We cobbled together as much stuff as possible by “cadging” unwanted sewing paraphernalia from family, friends and neighbours. Our USP at that time was the cutting table, aka the snooker table that had a top made from the roughest piece of wood you can imagine. Beggars couldn’t be choosers!

It was very slow taking off as we knew it would.

we started on the path of securing funds (see our funders page).

After our initial application for funding was knocked-back we finally secured a fantastic sum of £471.00 in 2014 from Warrington Charities Trust (WCT). This “event” proved to be beneficial in more ways than one!

Teddy George was made by Marjorie Worthington in 2014 and offered as a token of thanks to WCT. Presenting the cheque that night was the Deputy Mayor of Warrington, Geoff Settle. He adopted Teddy George as his mascot for his year as Mayor. Little did we know how that one would play out! Teddy George went everywhere the Mayor went and beyond. He travelled with Warrington Rotary all over Europe raising money for St Rocco’s Hospice. He was and still is active in and around Warrington as Geoff continues his good work in the community. We’re pleased to have played a part!

In our early days we’d laid on 2 annual textile crafting days for the children from Chernobyl. Apart from food and refreshments we provided materials, paint, glue, dye and machinery for the children to make gifts to take home. As always, we had an army of volunteers who looked after the children.

A passing comment was made that struck a chord! “Why can’t we do this for our village children?” From that moment it was our mission to remedy this but we didn’t think it would take that long! 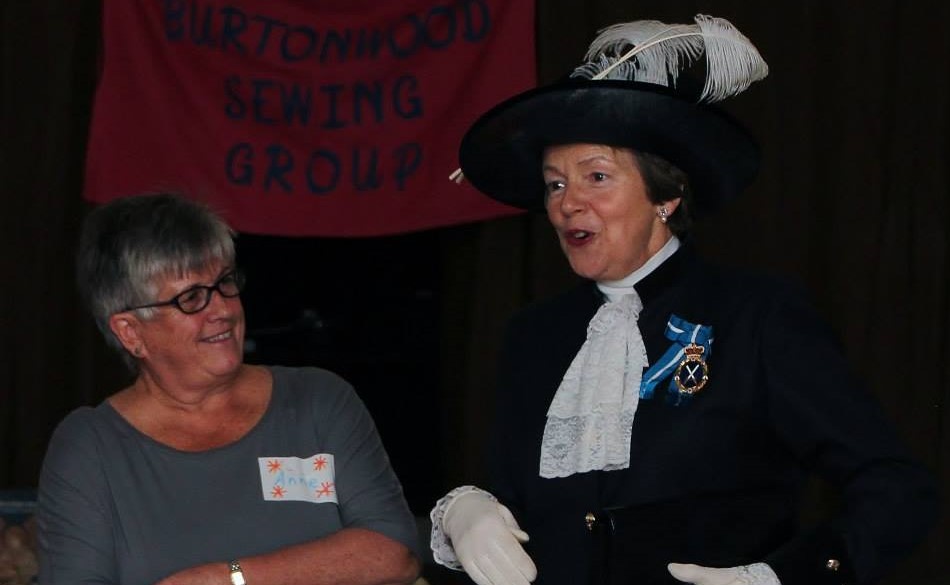 In October 2014 The High Sheriff of Cheshire, Mrs Susan Sellars paid BSG a visit to see and hear what we do. The village had never seen or heard anything like it. It was a seal of approval!

Tuesday, 11 December 2014 was a very busy day for Burtonwood Sewing Group. We had a photographer from Cheshire Life Magazine to put pictures to the words we’d already supplied for a small piece in their magazine. We also had the mighty BBC recording a piece for their “Life less lonely” campaign. (It’s still on the web.)

It turned out that the most important person joining us that day was our very own Ronnie Reynolds. (We just thought he’d heard what was happening and wanted to get in on the act.) 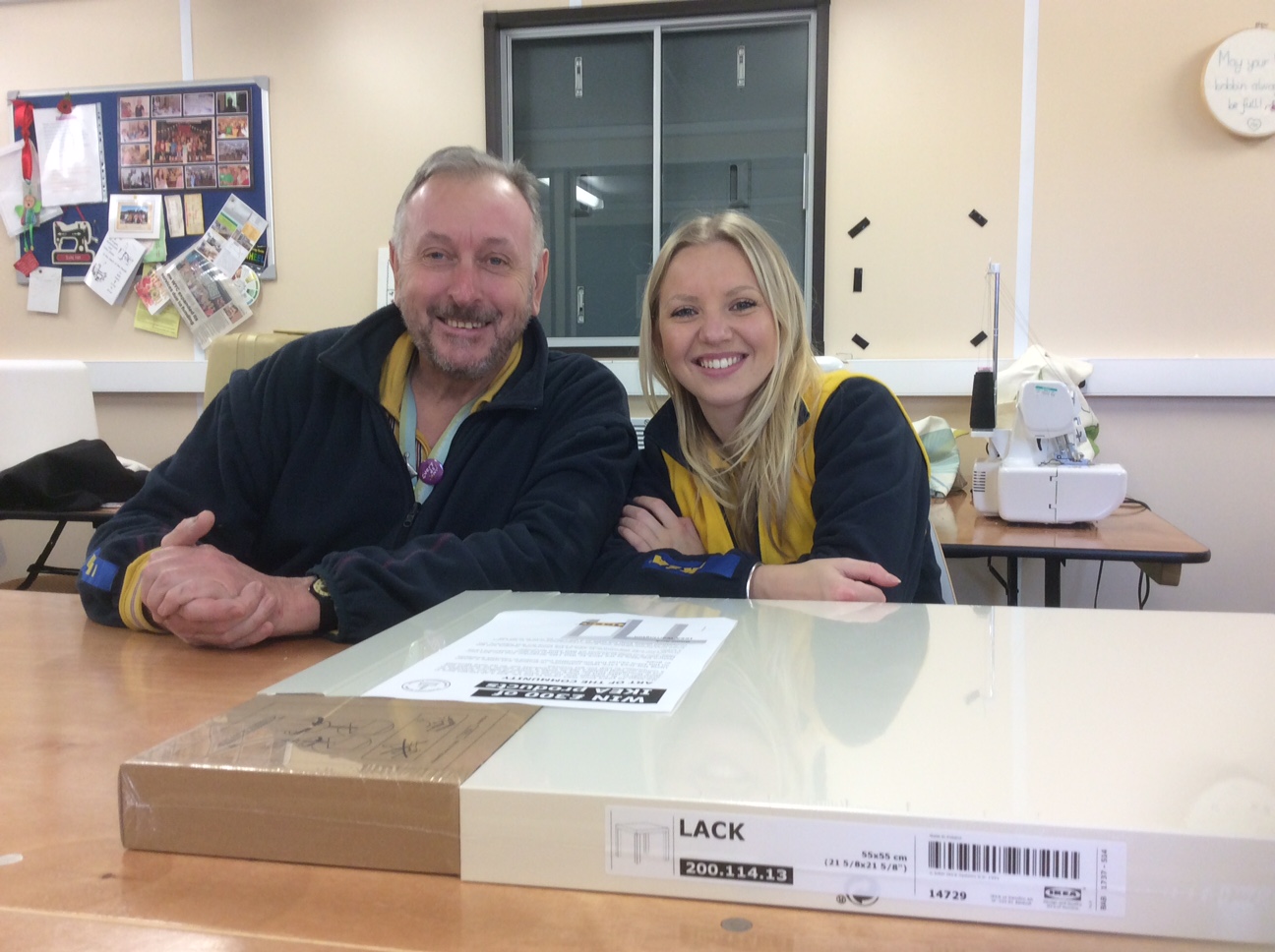 We could write volumes on Ronnie’s influence on the group but he wouldn’t be too impressed. It’s fair to say he’s the backbone of the set up. Every group should have a Ronnie!

A meeting was held at Fiddlers Ferry Power Station in November 2015 between all the community projects and business partners in Warrington. It’s there we had the good fortune to meet Paul Fishwick (Community Representative, IKEA Warrington pictured with Clare Ryan). We knew he would be the person to assist us with kitting out our new home (even though at this stage it was still a pipe dream). Not only did he agree to assist with helping us out he even offered us interim in-store accommodation whilst we were waiting for our new home to be made ready. Everything just fell into place.

We were seen to be making a difference.

WVA and Warrington Borough Council were providing guidance and assistance all through the planning stages and beyond.

With goodwill from Mr & Mrs John Abbey we were kindly offered a plot of vacant land in the village for the “duration of our project”.

Another benefactor kindly bought the brand new bespoke portacabin with the Steve Morgan Foundation providing a cash grant to pay the setting up costs.

We're keen to give everyone between the ages of 7 - 13 a chance to join us for 1.5 hours each week for some textile crafting when they'll be creating some practical and FUN extraordinary items that they'll be proud to say "I made that!" And it's all FREE thanks to the National Lottery Community Fund and our band of volunteers